Old and decrepit stone stairs lead down into this massive hole in land – down to the Hall of Daniau the Defender, last of the knights of the Order of the Ivory Sentinel.

The first side chamber on the descent is barred by a stone door magically closed awaiting the next member of the Order of the Ivory Sentinel to enter. Within is a small bathing chamber on the left followed by a chamber where knights were expected to change into white robes and anoint themselves with sacred oils before washing their feet again at the bathing chamber before continuing the descent.

The Hall of Daniau the Defender

The next chamber would normally be avoided by most coming down this way, but with the collapse of the stairs, the Cavern of 36 Blessings must be traveled through to get further down.

The Cavern of 36 Blessings contains a number of floor to ceiling pillars as well as near-pillars carved into the wall. Each of these 36 “pillars” is carved with inscriptions describing horrible scenes of carnage, excess, murder and bloodshed committed by the Order of the Ivory Sentinel in their zeal to protect their kingdom. Each ends with a prayer that subsequent knights of the order maintain the zeal to perform their duties as well as the knights in these stories. 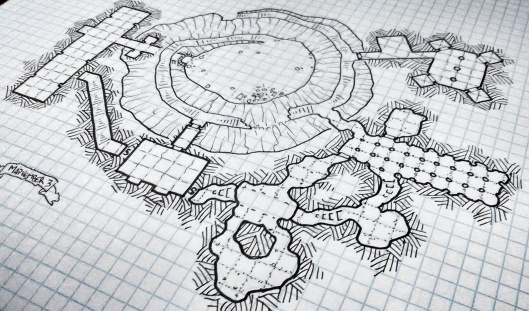 Below the Cavern of 36 Blessings is the chamber of the idols of the shields and then at the bottom of the descent we finally arrive at the Hall of Daniau the Defender – originally known as the Hall of the Ivory Sentinel but remembered for the name of the last of those knights now. This whole level has a very low ceiling now because of mud buildup over the years as rains have dragged dirt and soil into the hall from the bottom of the hole. At one time this was a feasting hall and the banners of the order hung from the walls. Now the banners are eaten and rotted nearly completely away and a few of the rotten tabletops seem to rest on the upper layer of the muddy floor.

This map was drawn during my run through 30 maps in 30 days as part of Mapvember 2016. The presented theme for the day was “The Descent”. I was also inspired by both my earlier Wygralak’s Hole map as well as the Dungeon Crawl Classics adventure “People of the Pit”.

4 thoughts on “The Hall of Daniau the Defender”