This week is a series of five posts about Mirelyn’s Skyrealm – a map I drew at the beginning of December as part of a cartographic challenge. The challenge was to draw a map of a “floating island” and the map that will unfold over this week was the result. I don’t normally give a lot of work-in-progress material for my pieces, so I’ll discuss what I did as I went along for this one.

After Miska’s Mapvember challenge, I found that I had really enjoyed the push to draw something every single day – and the added challenge / booster of a theme for each map that I drew. So I picked up another challenge.

The challenge was to draw a “floating island” or “flying island” – it immediately brought to mind the map I had drawn of Lino’s Islands in the Sky after reading the Skyrealms of Jorune boxed set cover-to-cover.

However, at the beginning of the month I was in the middle of an isometric mapping kick, so I tried something a bit different (although on a similar scale to Lino’s).

With isometric work, you need to start at the front of the page (so that you don’t find yourself trying to draw something in front of something already drawn), so I drew a few blobs of what I expected the islands would look like, and then immediately started detailing the front-most of these with a church, a lake and a tower. And big ropes to hold the island to the main island.

One of the big benefits of isometric paper is getting to show things that stick up and down from the main plane of the map, so I really went for it with the main island – the main focus when I started on it being the fortress over on the left that seems to just cling to the stony mass, and the landing pad about 20 feet below the edge of the island proper jutting out from the side.

And here we see why I started with the little island. To make the main island “thicker”, I had to add more rock outcroppings below the first ones I drew (and darkened them to make them feel shadowed and definitely “under” the main island.) Also added an odd-shaped sci-fi-ish tower / observation station (because Skyrealms of Jorune is another of the science-fantasy RPGs where the game occurs many thousands of years after the isolation of the planet from interstellar society and technology) and a crystal outcropping because crystals are the basis of the whole Skyrealms thing in the first place. In the Jorune setting, the liquid crystals in the mantle of the planet provide the strange energy that we don’t have on other worlds (explaining the whole “science of magic” bit). But when the crystals cool and harden, this same energy repels the crystals from the molten crystals, making chunks of the world heavy in crystals to actually erupt from the world, lurching up until the repelling force of the crystals is equalized by the downward force of gravity – creating Skyrealms like these. 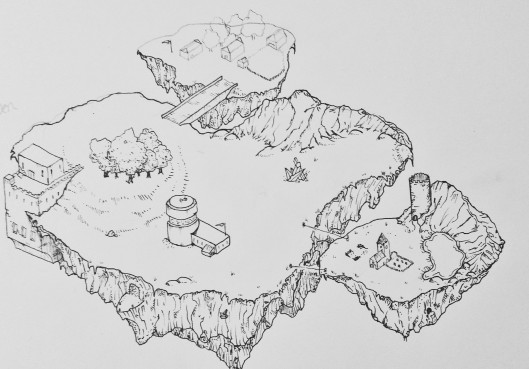 And then as I was working on the hilltop and trees beside the fortress, I decided that I wanted a farm on the island also. Something rustic and “normal” seeming for such a strange setting. So a third island was added and the farm sketched in in this photo. At this point I also added some extra hills around the lake on the lower right island to try to make it look less like it is about to just pour off the island.

I picture the lower right island as abandoned now. The lake was poisoned, the highplains church abandoned, and the highplains mill burned down. Suddenly the skyrealm isn’t capable of being really self-sufficient without a good water reservoir and mill, so most of their food has to be imported from ground-based farms – making the whole island the perfect place for someone with lots of money (like a successful adventurer) who is less concerned with self-sufficiency than with having a base of operations that is both pretty ostentatious and with limited means of access.