Every month that Patreon funding remains over the $400 mark I sift through my back catalog and bring up a selection of maps that my patrons then vote on as to which will be released under the free commercial-use license. This month I decided it was time to present a very different field of options, and thus pulled out a dozen city and town maps from the history of the blog and put them up for voting. As we ended last month at the $500 mark, the two top maps selected are being released – so today I’m happy to bring back Dolem’s Spire. 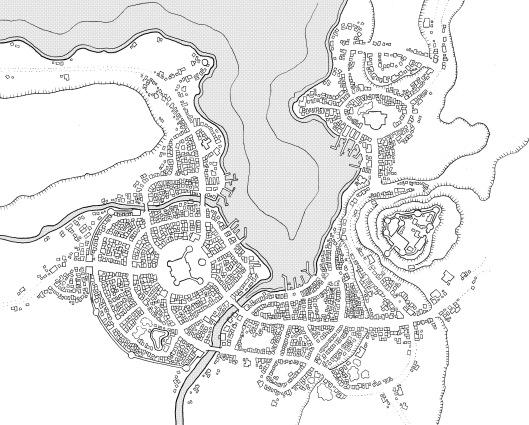 The original city of Dolem’s Spire is between the two rivers leading into the bay. Walled and centred around a palace (now given over to barracks for the town guard and the mercenary force the town uses as an economic driver), the old town slowly expanded beyond the river banks to the north and east. Dolem’s Fortress atop the spire is a much more recent addition to the town. Once a simple watch tower, the spire is now home to a plethora of towers and fortifications piercing into the sky like armoured fingers in defiance of the gods themselves. Lord Dolem watches down upon the city from the spire, reclusive and hostile to those who would attempt to visit or trade. Contact is usually through three advisers who have his ear and trust and who deal with outside agents and trade concerns (as well as the contracts for Dolem’s mercenary forces). These three advisers are

North of the spire itself is the “new town” that has grown up in the years since the spire was built. It in turn is centred around the Monastery of Iron Sands and the North Docks, the largest pier in the city and the associated warehouses.