Cut into the hillside under the Temple of Three Winds are ten round windows that look into the Underhill Saloon and Eatery, a halfling establishment that attempts to cater to all comers. 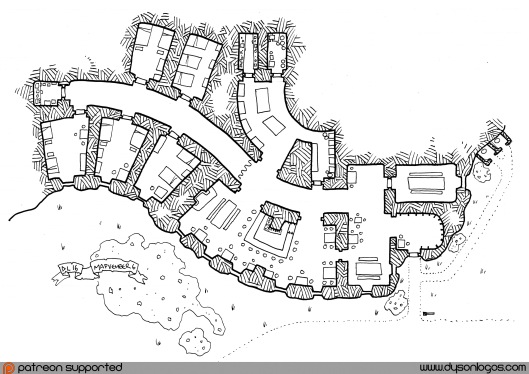 While traditionally halfling in architecture and design, the Underhill Saloon itself is built mostly to human scale. On a busy evening the drinking and eating overflows from the main hall into the entry hall and sometimes even the coatroom where guests are cheered as they enter the building either for the first time of the evening, or when they return from their third trip to the outhouses.

The Underhill Saloon & Eatery (with grid)

In addition to a full bar and kitchen, the Underhill establishment offers three cozy guest rooms along the face of the hill (each with an emergency door built around the hillside window, locked and barred from within). The staff and owners maintain two rooms on the in-hill side of the passage for their own use.

A private feast-hall is also available for rent and private meetings, located just off the entry hall around the corner from the front entrance.

3 thoughts on “The Underhill Saloon & Eatery”