Everything that can go wrong is going wrong in Bellfield Landings. 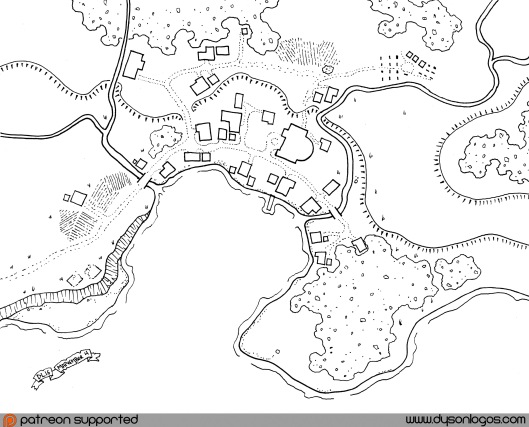 Something keeps digging up the graveyard and chewing on the bodies – except for the bodies that get upset about that kind of thing and start fighting back and then wandering into town wondering why they were buried in the first place.

The priest was sacrificed on his own altar last night, his blood used in some horrific demon summoning ritual that has even darker forces slipping into town through the corrupted fane of the temple.

Tritons have ended the local fishing trade “with extreme prejudice” claiming that one of the local fisherfolk netted their princess and proceeded to chop her up and mix her in with their other product.

The local druid is sending out messenger creatures every day trying to get reinforcements because something foul is stalking the grove and the trees are dying, including the tree of her partner, the local dryad.

The “Little Tawny River” on the west side of town has changed colour to a strange milky blue-white. Cattle won’t drink from it, and the flour from the mill along the river has a strange flavour to it.

And crazy old coot Ernest keeps claiming that the mayor has been replaced by a doppelganger.