Every month that Patreon funding remains over the $400 mark I sift through my back catalog and bring up a selection of maps that my patrons then vote on as to which will be released under the free commercial-use license. This month the second choice was Pendershire from the very first month of when I started this Patreon Campaign.

Pendershire is an inviting community on the edge of the wilderness. This large town deals with hostile humanoid neighbours, unpleasant local fauna and a variety of other menaces that make even Pendershire’s farmers tougher than nails.

The city walls around Mariel’s Bay all face into the wilderness, with almost no defenses set against marine attack. To the people of Pendershire, Mariel’s Bay is seen as a safe haven – a place for trade, resupply and reinforcements. 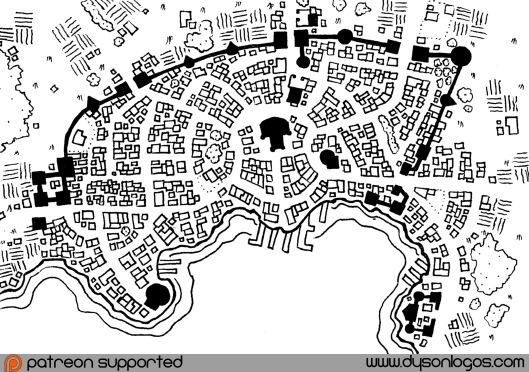 I like how the streets focus in on (without radiating directly out from) the fort / castle / church in the middle of the city. It works well for me.

The map of Pendershire was drawn in a (now full) 4 x 6 inch notebook using a 0.7mm gel pen. A rough draft of the street layout and shoreline were sketched in with pencil first. The map was then scanned, contrast-enhanced and smoothed, and then the screen was added for the water.