Dead Kraken Anchorage was a small secret pirate cove in the Dunnswall Cliffs until some idiot brought a cog in too far and wrecked the damned thing against “the old Kraken’s beak”.

With the wrecked cog clearly visible from the sea, it is only a matter of time before someone comes in and checks on the rest of the area where decades of work had produced a hiding place where pirates would load and unload ill-gotten wares to transfer them between ships or just to let really hot cargoes chill out a bit before bringing them to market. 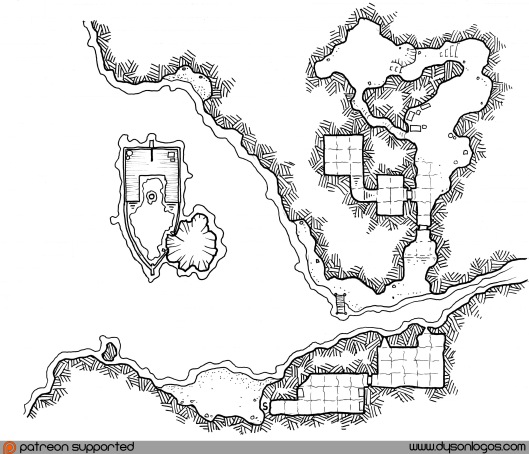 Most of the pirates have skipped out of the cove knowing it is just a matter of time now before the secret is out, but a few desperate souls are sticking around hoping to sneak off with whatever valuables have held them here… just as soon as another friendly pirate craft shows up to collect them.

And of course a thank you to Zzarchov who’s Neoclassical Geek Revival campaign (“Expedition to Xan Than Du”) has had us running with pirates lately and inspiring my nautical maps.

Dead Kraken Anchorage was drawn using a selection of Mitsubishi Uni Pins on standard letter-sized graph paper. Unusual for my normal style I sketched out the cog first in pencil because I’m not good with boats, and this map has a pretty distinct scale of 5′ per square since my usual “floating scale” doesn’t work well when the size of a cog is pretty well defined.