There’s a huge pile of awesome in a $10 package on RPGnow right NOW. The ConTessa 2017 Bundle of Awesome is a great collection of PDFs put together to support ConTessa‘s summer convention schedule.

The bundle has a whole pile of awesome stuff in it including adventures, zines, and whole RPGs by some of my absolute fave designers (and two of my products in there too). There’s about $150 of wicked awesome in there for $10.

But that’s ignoring the presence of one particular title.

Fire on the Velvet Horizon is a brilliant book by Patrick Stuart and Scrap Princess. It is put together in the true old school manner of cut and paste and photograph of each page after it has been assembled. It oozes and skitters with genius monsters from some of the wilder imaginations in our community.

It is truly truly awesome.

And it is NEVER available in PDF. Except right now. Until Tuesday July 11th there is a PDF copy of Fire on the Velvet Horizon in this $10 bundle. This book has always been a print exclusive. It was such a no-brainer that I had to buy this bundle the moment it went on sale for this title – and I already have the print edition and most of the other contents in the bundle. 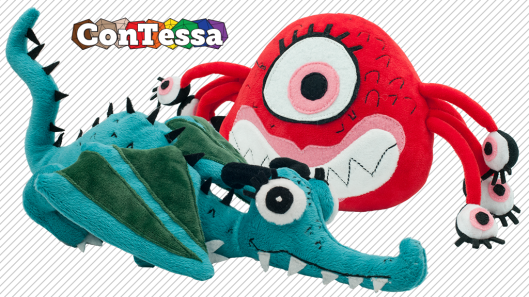 Already have the bundle? Want to support ConTessa in other ways? Love cute plush monsters? ConTessa is ALSO running a kickstarter for stuffies of their mascots. The dragon is already unlocked, the beholder is coming, and there’s a mimic further down the line of stretch goals. YOU KNOW YOU NEED THEM!

2 thoughts on “Fire on the Velvet Horizon, Delves, Plush Monsters, and so much more!”