One of the first structures people encounter when travelling along the Heart of Darkling is the “Demon Bridge” where the bitter ice demon and his kobold allies have complete control and use their domain to trade ice-iron weapons and hardware to those who know of their existence.

Below the Demon Bridge is the home of these creatures and their master – a small set of dungeons and caves where they ply their craft and live. 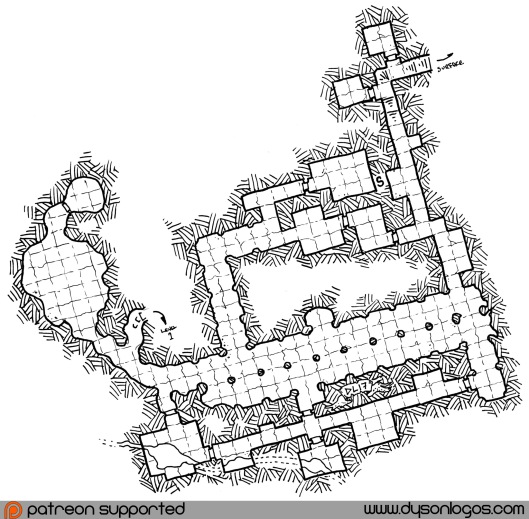 Heart of Darkling – The Demon Halls

The main hall of the Demon Halls is a 30′ tall arched cavern that has been crudely cut to have pillars down the middle and matching supports on both walls set at 20 foot intervals. Kobolds regularly run through here, but never tarry, for the cave is older than their clan and they believe that their liege was born or spontaneously created within this hall and that he haunts this space. (He actually lives in the secret pillared chamber on the level above and is only down here when his magics are needed in the craft of the ice-iron weapons).

The halls below the main hall are where most of the work is done. These rooms are the smithies of the kobolds, with ice-cold water coming in from a small cut in the wall linking to the river above which is in turn used in multiple capacities through the smithing chambers. What is not found here are mines, as the ice-iron does not actually use any natural source of iron and instead uses discarded portions of the bitter ice demon himself as the primary ingredient.

To the north are living chambers and guard posts, and a guarded staircase that leads to a secret exit on the surface (used by the kobolds to hunt surface creatures for food and by particularly brave kobolds who wish to see the daystar). 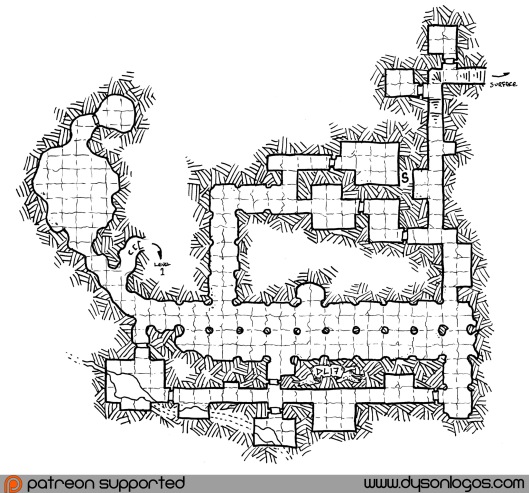 Heart of Darkling – The Demon Halls

The first map (at the top of the post) is set to the same alignment as the map of the upper level. The second version (above) is set so the grid is “flat” instead of offset like the original level. (The top map has North as the top of the page, in this one it would be aiming to the upper right).