Every month that Patreon funding remains over the $400 mark I sift through my back catalog and bring up a selection of maps that my patrons then vote on as to which will be released under the free commercial-use license. This month we released Serzen’s Seven Stairs, and now it is time for The Four Javelins Coaching Inn!

Big inns, even if they are mostly an anachronism in a traditional medieval RPG, are definitely a big part of what we expect when playing RPGs. I have inns and coaching inns turning up fairly frequently as a place to gather information, sleep, and eat. Even more importantly, they act as a signpost of civilization. Coming across a walled coaching inn along the road means that you are somewhere safe-ish, or at least on the verges of civilization.

Four Javelins Coaching Inn is the kind of establishment you find either just outside of a small city, or about one day’s travel out along a major road. It is a large stone two-story structure with a wooden stable and coach garage set beside it. As an inn, the establishment provides food, drink and lodging for both travelers and their horses and coaches. The large dining room (The Manticore Room) is reserved for large dinners and rich guests – the majority of guests take their meals in the main hall, sitting room, or even in the enclosed courtyard when the weather is nice. 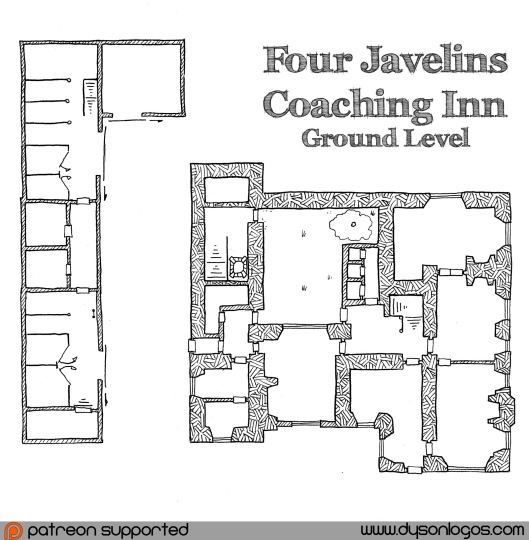 With eight guest rooms and a sitting room upstairs, this is an inn with a lot of room and is probably a major money maker for the owner – of course requiring that it be set somewhere that it can expect to rent out a number of these rooms most nights. The west wing of the inn houses the senior staff of the inn (and the innkeeper’s family), while the lesser staff live upstairs from the stables next door.