If you follow me on any social media* you know about Deven Rue & Rue Ink. Deven draws stunning regional maps, and her colour work has been incredible. She also drew the new cover for the Challenge of the Frog Idol adventure which I still plan on releasing one of these days when I don’t have 73 deadlines rushing at me like an out of control truck. But another awesome thing she does is she takes my commercially-released maps and colours them and releases these remixes to her supporters on Patreon. The three maps in this article are all maps of mine that she has coloured.

Then we have S. John Ross, the man behind Cumberland Games & Diversions (and the mad genius who brought us not only the simple genius of Risus, but also the Pokethulhu Adventure Game and Encounter Critical and piles of other fonts and goodies). He’s been making and releasing fonts forever – but one that gets updated every now and then is his HexPaper Pro font. A single font with 62 glyphs for drawing hex paper (and graph paper, iso paper, and so on too, but really, the emphasis is on the hexes). 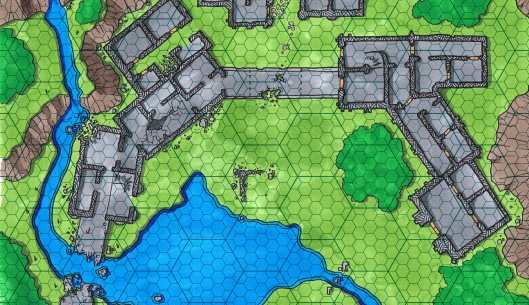 The hexes are lovely. I’ve showcased three different styles here with maps I’ve drawn and that Deven has coloured, but there are so many more. They make me want to make new BattleTech fields of combat, maybe sit down with Deven and design some alternate Advanced Squad Leader boards… and I’ve always kind of wanted to take a hack at the classic original D&D wilderness area – the board from the Wilderness Survival game.

And with a few isometric glyphs in the mix, I’ll definitely be printing my own isometric paper at whatever scales I need for future iso maps!