Another month of exploring the undercity along the riverbank, just south of the Palace of the Realm, and we again find ourselves in basement ruins that were not entirely filled in during the Ditlana but were sealed off and built over as sewers were built to take their place.

The most remarkable element of this part of the map is a great hall that is now cut into three parts that is in turn connected to what appears to be a partial duplicate of a temple understructure just south of here (in map 1O). Most of the hall is in quiet rotting ruins, connected to the old passages along the sewers in 1R. All of these sections were parts of the temple 400-500 years ago.

The westernmost section of the old great hall has been stripped of all religious iconography and some of the walls have even been replastered to keep the moisture out. A secret door connects to the sewers here and the hall is used as the meeting place for a secret society who’s members enjoy the irony of operating out of the hall that was once part of the temple that seeks their destruction. 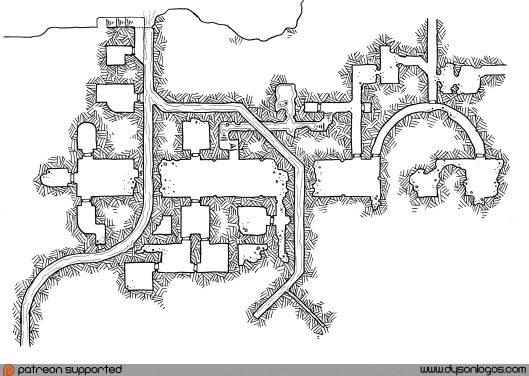 Accessing this map requires either coming down the stairs to the sewer access and maintenance chamber on the north side of the map (the chlen hide bars here are locked to keep out intruders, but many copies of the key are now in circulation), following the same sewers from their source in map 1N, or coming in through the sewer tunnels in 1R.