This post is one of a series presenting the hexmaps of Baraloba and the areas around it. You can see the rest of the set here: [Baraloba and Environs].

This hex sits to the lower-right of Baraloba and is mostly a forested hex cut through by the road that leads from Baraloba to the distant Citadel on Sabre Lake. 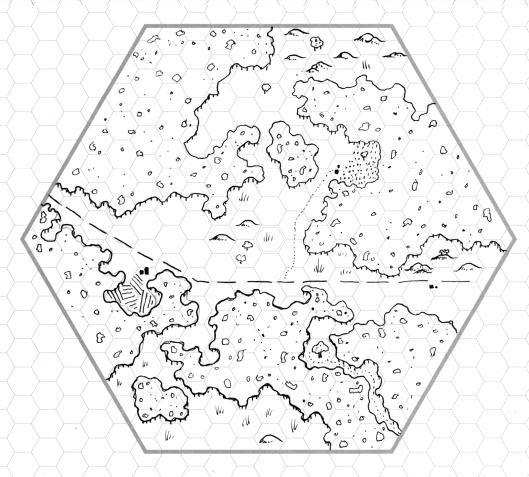 The Road to Sabre Lake

Along the road we run into a few classic items for a D&D game – there’s a large farm near Baraloba itself , a trail leading off to an abandoned logging camp to the north, and finally Strickson’s Auberge, a traveller’s inn roughly 9 miles outside of Baraloba (about three hours travel time). North of Strickson’s Auberge is another of the ancient giant’s towers overlooking the inn and valley, now slowly collapsing.

Southwest of Strickson’s Auberge is a clearing in the woods with a single massive tree at it’s centre. A trail leads deeper into the woods from the tree, probably to another town, or perhaps the base of a small group of humanoids who host their religious activities at the tree.

3 thoughts on “The Road to Sabre Lake”