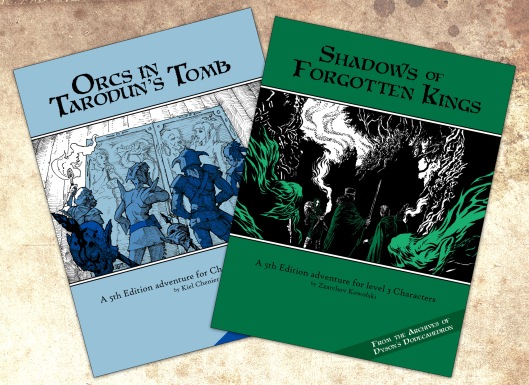 The 5th edition adventures you didn’t know you were waiting for are on their way!

This week we’ll be releasing Shadows of Forgotten Kings, a level 3 adventure written by Zzarchov Kowolski who has written some of my favourite adventures of all time – from his self-published Gnomes of Levnec and A Thousand Dead Babies, the recent DCC Ghoul Prince adventure, and Thulian Echoes, Lamentations of the Gingerbread Princess, and Scenic Dunnsmouth for Lamentations of the Flame Princess.

This adventure pits characters against strange ghost panthers striking from the jungle ruins of an ancient empire. Something dark awaits in the old ruins, and unless the adventurers get to the root of things, the attacks seem to be unending and will wear down any defenses in time.

And while Shadows is on the way, we’ve got Kiel Chenier’s Orcs in Tarodun’s Tomb in layout as our next release in the line.