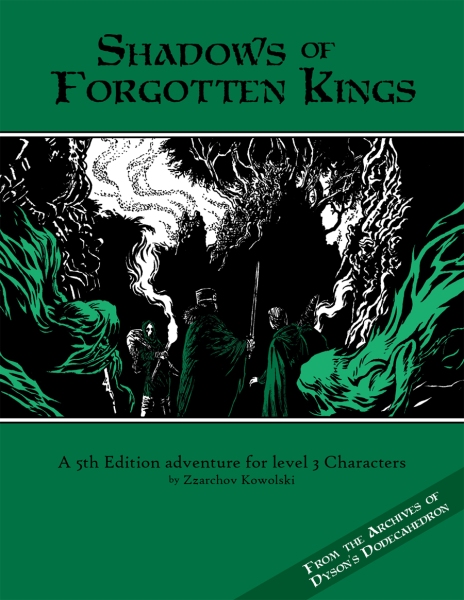 Shadows of Forgotten Kings is a level 3 adventure that brings the party to a village at the edge of the jungle that was home to an ancient empire.

“…an old school dungeon crawl that will function under the mechanics and typical playstyle/conceits of 5th edition D&D, while inspiring players who are comfortable with this game style to think about and hopefully embrace some of the classic dungeon crawl/location based adventure ethos.”

The villages on the edge of the jungle used to be wealthy: they gathered fruits and exotic hardwoods from within the jungle and sold them as wines and furniture to regular merchant caravans in exchange for grains and other staples.

But caravans do not make it through anymore. A handful of tattered survivors have made it back to the city and reported being assaulted by wave after wave of panthers that would attack, retreat, and attack again in replenished numbers. The merchant houses want their lucrative route back. The villages need grain and supplies; their people cannot live forever scavenging fruit and huddling by their hearths in fear every night.

“Shadows of Forgotten Kings has a consistent feel, creating a lost city jungle adventure that emphasizes both the tragedy of the city’s ancient fate and firmly roots the adventure in a swords & sorcery setting that is refreshingly mysterious and dangerous”

Tales lead deeper into the jungle – to the ruins of an ancient empire fallen to a terrible curse.

Get Shadows of Forgotten Kings by the renowned
Zzarchov Kowolski for merely $3.75 today only!

1 thought on “Deal of the Day: Shadows of Forgotten Kings”