The heat of summer is upon me – and just when I was hoping it was safe to get in the water, a kraken was released! The first of the two maps being re-released under a commercial license is Melad Crossings, a small village map I drew in the summer of 2014.

Foul things are afoot in the town of Melad Crossings. One of the two mills has stopped, the smell of death creeps by in the wind from many buildings, the streets are barren, and those who live are not likely to be out of doors except as is necessary.

The water along the west fork of the river is running milky white, and none of the fishermen are among the living, struck dead two weeks ago just as the river began to change. But that doesn’t explain all the deaths – something else must be working it’s way through the townfolk… while the headsman says it is disease and begs for the church to send healers or paladins, others believe something far more sentient and sinister is behind the continued deaths. 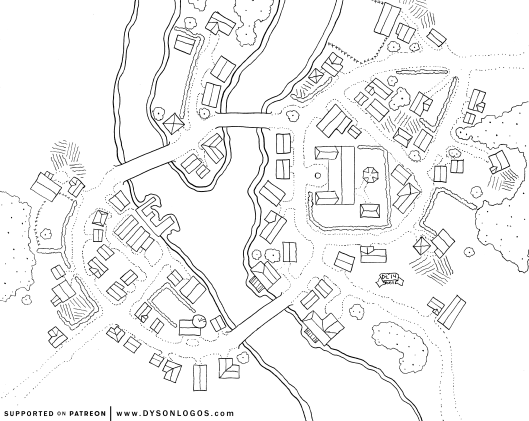 Or, you know, it could just be a pleasant little town for your adventuring party to chill out at en route to their next adventure.

1 thought on “Release the Kraken on Melad Crossings”