It is time, once again, to delve into the back catalog of maps here on the Dodecahedron and pull out two more to be re-released under the free commercial use license thanks to the amazing support of our Patreon backers. Mad Fenrick’s Manor and Basement were released in April and May of 2014 and are back! 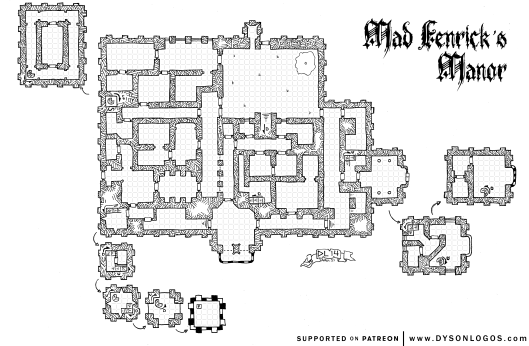 A few miles from the nearest outposts of civilization, just over those hills to the west of here, are the old estates of the Trent family. Sitting almost smugly on a hill in the midst of overgrown hedge mazes and fallow fields is the manor of “Mad” Fenrick Trent. Sure the first parts of the structure were initially built by his grandfather, and the last Trents to live in it were his great-grandchildren, but Mad Fenrick is the Trent who put the most work into the half-fortified squat monstrosity.

Of course, a massive cobbled together and defensively structured manor like Mad Fenrick’s Manor doesn’t stop with just the main level and a few towers. In the main courtyard of the manor is a set of stairs that originally lead to the Trent family crypt, but that now connects to a small dungeon (as well as Mad Fenrick’s Root Cellar, Mad Fenrick’s Family Crypt, Mad Fenrick’s U-Store-It, and Mad Fenrick’s Large Rodent Repository, of course). With the manor grounds now abandoned, who knows the sorts of things that crawl about beneath the old manor house. Whatever they are, they are probably very lonely and would love to play with any visitors.

And to be true to the originals, I’ve included versions without a grid:

It would, of course, be absolute foolishness to claim that these maps weren’t in turn inspired by the classic Tegel Manor adventure which I first encountered as a player and that has haunted my games ever since.

1 thought on “Release the Kraken on Mad Fenrick’s Manor!”