A set of small stony islands jut out of the waters near the the northern reach of Alders Bay. They contain a number of small ruins, likely linked to the ruins of the castles and forts that have slowly been overwhelmed by the encroaching swamps on the northwest shore of the bay. 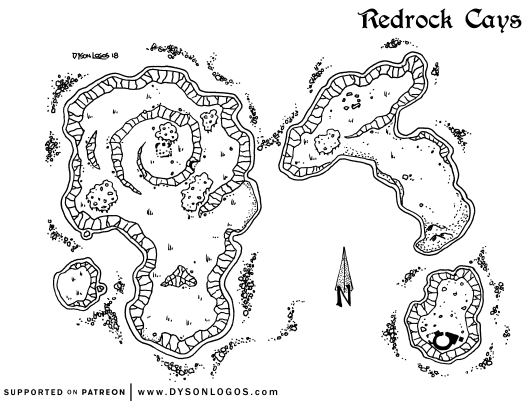 Difficult to land on, the islands are surrounded by ship-killing shoals and much of the land is atop tall red cliffs. Most make landfall on the sandy extension that nearly forms an isthmus between the two eastern islands – although the Oni pirate Vurd Skullbow has been known to bring his vessel in through the southern access and anchor it between the three islands. 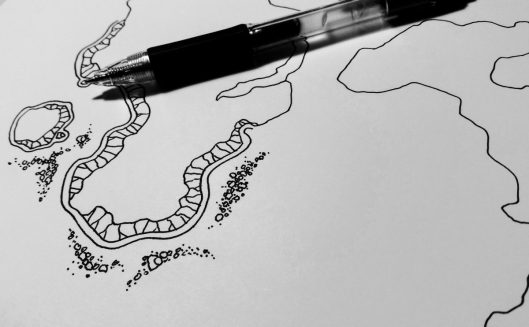 Each island has its own point of interest. The large island has a ruined watchtower on its peak, but also has a cave system beneath it that was expanded at some point, likely by the builders of the tower. Those caves are used by Vurd to stash treasure and hostages on occasion.

The northeastern island bears the marks of many landfalls and small campfires. The long beach is littered with detritus – much of it charred firewood and empty bottles and casks. On the rise of the island is a set of fairly recent standing stones – no more than a hundred or so years old – the stones all appear to have been scavenged from the other ruins on the islands.

The small island to the southeast still sports a standing watchtower, although the wooden roof has long rotted away. The island however offers no means to get to it – the top of the island is a solid fifty feet above the waters below, with treacherous cliffs on all sides.