From 2008 through to 2013, Sabre Lake was the centre of a number of campaigns that I ran – using B/X D&D, Advanced Labyrinth Lord, and D&D3e. Each campaign focused on different elements of the region – although two of them shared the same intro arc starting with Goblin Gully and then dealing with the horrible thing that was inadvertently released while exploring that site. The Citadel at Sabre Lake

The namesake city of this map is a cheap crib of Sanctuary from the Thieves’ World novels – down to it being on a contested border and fairly recently having changed hands from independent to the Satrapy and then to the Allied Empires. It is the last northern city in the civilized lands. Beyond Sabre Lake there are other cities but they are weeks of travel away and remain independent of the various political factions that rule this portion of the land. 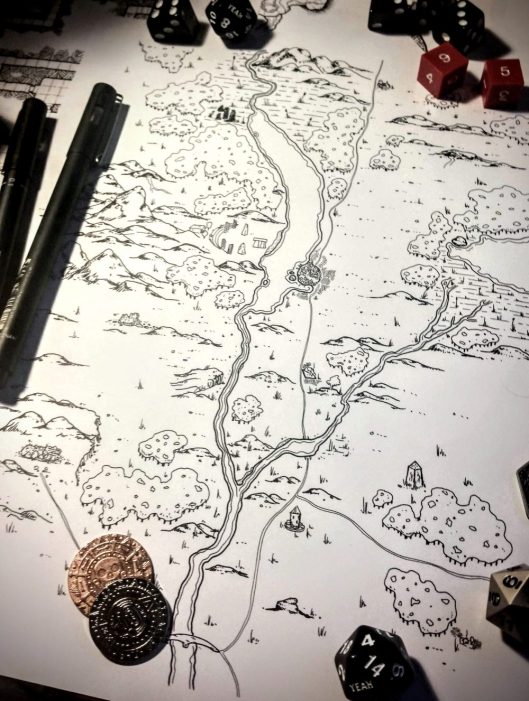 The people of Sabre Lake do their best to continue going on as if things hadn’t changed, but the lawless ways of an independent border town don’t mesh that well with the views and laws of the new management. And thus there is strife and friction between the various cults, the Imperial garrisons, the puppet government, and the few remaining citizens with money and clout from the old regime. Throw in the classic feeling of Thieves World to make it a wonderfully crapsack city that you would only love if you were stuck here. The Citadel at Sabre Lake (no tags)

The only element that recurs in every campaign I’ve run here is the Seer. I’ve even had two other campaigns come to Sabre lake over the years to find the Seer of Sabre Lake. To visit the seer, one first visits her shrine in the Citadel, where her acolytes will fill you in on what is needed for you to be granted an audience. Generally it involves renting a nice boat (often from a friend or family member of one of the acolytes), getting it loaded up with expensive or weird things that are useless to you (a samite sail, really? let me guess, your sister weaves samite?) (thirty four feathers from seventeen different swans?), and sailing across the lake to visit.

Those who do not complete the tasks assigned find only a rocky shore and a shallow stony valley. Guests however will find a stony trail at the shore that leads to a much larger valley surrounded by ancient marble ruins. Sometimes there is a test at this point (beat the Seer’s mighty centaur champion at chess!). And then the Seer grants you the assistance of her knowledge and visions.

Or just tells you useless riddles.

4 thoughts on “The Citadel at Sabre Lake”