While a number of the old shaft tombs of the Etturan Dynasty have been found and explored, there is one that remains a well-kept secret amongst sages, masters of dark arts, and the few adventurers who have been there. Possibly the original shaft tomb of the dynasty, or perhaps a strange discovery that became the inspiration for the ones to come – the Bottomless Tombs seem to have earned their name.

Seventy feet beneath the cluster of tombs at the entrance to this seemingly bottomless shaft are a second series of tombs. These are notable in that both sets of doors into the shaft are on the same level and same orientation (an open archway in the centre of both the east and west walls of the shaft), and that the lower set of portals are linked by a stone bridge that spans the shaft.

The central part of the so called bottomless tombs is a 15 foot x 15 foot shaft that seems to go down forever. Determining the actual depth has proven to be beyond the abilities of scrying and simple engineering, and areas of both permanent magical darkness as well as areas of anti-magic (as well as a host of hostile inhabitants) make exploring the depths of the shaft an unwelcoming idea. 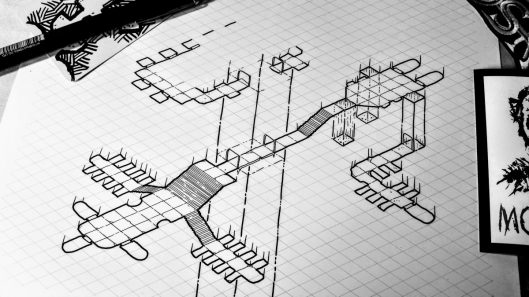 6 thoughts on “The Bottomless Tombs – Part 2”