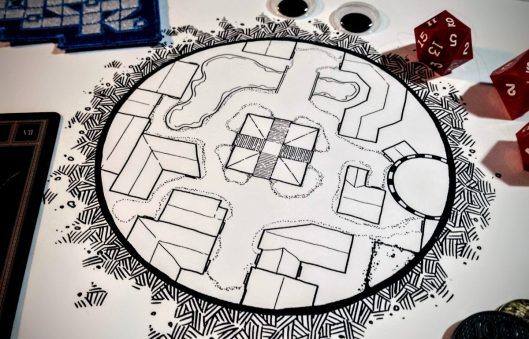 The great city of Oublos-Dorren was destroyed decades ago by a massive pyroclastic flow followed up by a slower engulfing surge of lava from the Searing Mountains eruption. All of the city except for a small “bubble” almost exactly 180 feet across centred on a small temple of Lazotl – a local deity of misfortune and revenge.

The Bubble City of Oublos

The priests of Lazotl got the warnings of the impending eruption through a series of poison-induced visions and managed to erect a protective spell over their temple and a few buildings in the area through the Reliquary of Kesh, an artifact that had “fallen” into their possession.

Travel in and out of the “Bubble City” is now only achieved through magical teleportation by those who know the way, and through a glowing green magical portal on the peak of the temple of Lazotl. The portal opens up to two different places in the world above – stepping through the north side of the portal leads to a small basement shrine of Lazotl in the nearby fishing village of Ashford (which was reduced to a few homes during the Searing Mountains eruption).  Stepping through the south side of the portal leads much further away, to the frozen plains at the edge of the world.

The Bubble City of Oublos (no grid)

The bubble city is illuminated by this portal in a flickering green light, as well as the mix of Lazotl worshipers, thieves, and a few mercenary adventurers that use the bubble city as a “safehouse”.

PCs would most likely find the bubble city in search for the Reliquary of Kesh, or hunting for one or more of the dastardly residents of this small bubble city.

7 thoughts on “The Bubble City of Oublos”