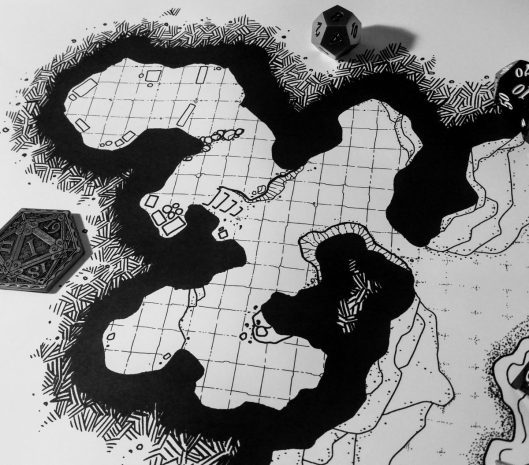 The black stone cliffs of Robrus loom over Rat Crater Lake – the dark stone looking perpetually wet and somehow tainted by the often rainbow-sheened waters in the crater.

The cliffs are pierced here and there by small caves – places where inclusions of softer stone have been washed away by the waters of Rat Crater when the water level here was 20 or so feet deeper. Most are narrow little crevasses and defiles, but one is significantly larger and has become home to an ogre mage and a crippled warlock who seems to be as much studying the ogre mage as working with him.

Stashed around the cave are the remains of several expeditions that disappeared in and around Rat Crater. Probably including whatever MacGuffin brought the party here to begin with.

This maps’s a departure in some ways from my standard style as I was playing a lot with line weights as I worked on it. I think I’ll try again with another cave in this style, but with the heavy black outline of the cave reduced to half the thickness before it breaks up into my usual hatching.