There are many dark and cramped dungeons out there to explore – descents deep underground, delves into ancient confines…

But what is at the top of those first stairs? 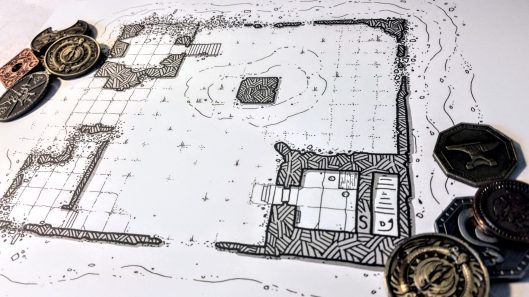 Onyx Hill is capped by old ruins of a small fort. Shattered and broken remains of a pair of structures and the old wall remain, along with one squat stone guardhouse that boasts the only intact roof in the area. In the centre of the old ruins is the peak of the hill with a 60 foot tall square pillar of onyx resting atop it.

This onyx monolith gives the hill its name, and attracts the occasional historian and sage to investigate its origins and to take rubbings of the inscriptions upon it. Much of the surface has been worn away or damaged by ancient violence. In the back of the squat guardhouse is a secret door that opens over a set of stairs that lead down under the hill, and perhaps to the base of the onyx monolith itself… or perhaps a massive sprawling dungeon chosen from the huge numbers out there.