If you are going to build a secret temple to a pariah god that is not intended to be worshiped at, why not go whole hog and build it at the bottom of a deep and nearly inaccessible desert cave?

Dedicated to a god of betrayal, none would worship here regularly (for fear of being in turn betrayed by other worshipers for their faith in this pariah god). Instead the site sees the occasional “solitary” pilgrimage – small groups trek across the desert and climb down into the red rock cavern to the lowest level where the group leader “examines” and “researches” the dark temple down here.

As a respite in the desert, various subhuman tribes have been known to set up semi-permanent bases in level 1 and sometimes level 2 of the descent. At the bottom of level 2 is a massive tripod of old wood and rusted steel that once suspended some sort of elevating platform that accessed levels 3 and 4. 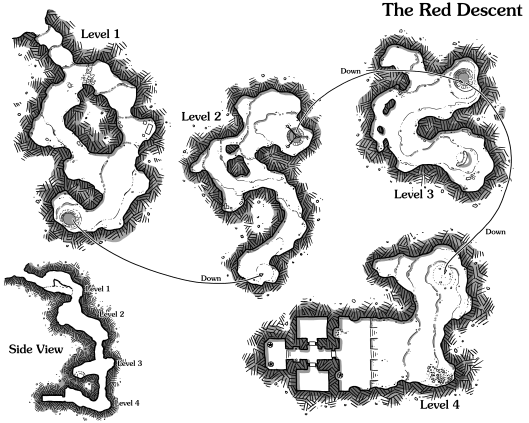 The Red Descent (no grid)

The third level contains a free-standing arch of obsidian that appears to have operated as a magic portal of some kind, and still detects as magical. Perhaps those who have true need of the temple below still have the magic devices to open this archway from elsewhere and slip in and out of the temple without alerting those above. Or perhaps the archway only opens when the unworthy enter the temple, summoning guardians from other worlds to defend it.

7 thoughts on “The Red Descent”