Every month we go through our back catalog of maps and the many patrons over on Patreons vote on which two should be re-released under the free commercial use license. This time we’re going back to a map from 2015 –

I often feel that dungeons should be damp, deserted, half-collapsed things. Thus we have Lady White’s Ruins – an old hillside structure, long ago razed by the marching forest army, and the structures that had been cut into the stone behind the ruins. 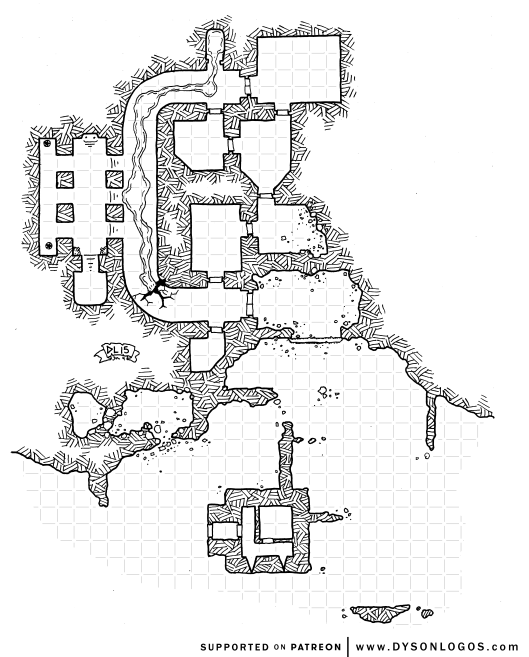 Known as Lady White’s Ruins, the old structure and dug-in passages in the hillside have been home to several sightings of a supernatural ghostly woman nicknamed “Lady White”.

There is still a “solid enough” base of a tower standing in the old ruins, although the upper levels are long fallen and the remaining rooms (except for the entrance passage) are open to the elements.

Beyond are two entrances cut into the hillside. Both lead to half-collapsed chambers full of natural debris and ruined stonework. Warded portals lead further into the ruins from the larger of these two chambers, to a long passage where water flows from the old well down to a massive crack in the floor where the marching forest cracked the very ground of the ruins with their roots and entish might. “Lady White” herself is rumoured to be the half-elven lady of the manor when it was crushed by the marching forest, seeking revenge against all who would defile her home. But she is actually the spectre of another woman – a foul-mouthed and unpleasant adventurer who was pushed into the massive crack where the stream now flows by her adventuring companions when they decided they didn’t want to split their treasure with her any more. If somehow pacified, she knows the locations of several other treasure troves in the region where her companions hid their loot or were unable to defeat the local guardians.