Every month we go through our back catalog of maps and the many patrons over on Patreons vote on which two should be re-released under the free commercial use license. Our first map this month is a recent creation drawn in August.

Colloquially known as “God Alley”, the Temple Walk is a set of courtyards and walkways winding between 13 different shrines, temples, churches and reliquaries to various deities and godlings of the city. Not all the deities of the city have shrines here, and few of the larger faiths are represented – the area is too tight and confined for the churches with larger congregations, and the temples here gently push away any of louder cults in the area. 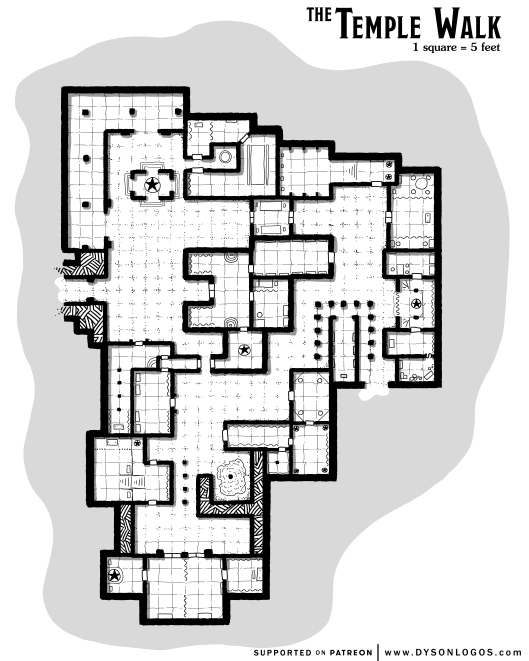 Because of the narrowness of some of the alleys and spaces in the Temple Walk, it is a pedestrian-only part of the city (enforced by a few “church police” volunteering for one temple or another and working the entrances to the walk). And it is a pleasant change from the bustle and noise of the nearby markets – a sudden break to quiet spaces of contemplation and prayer. 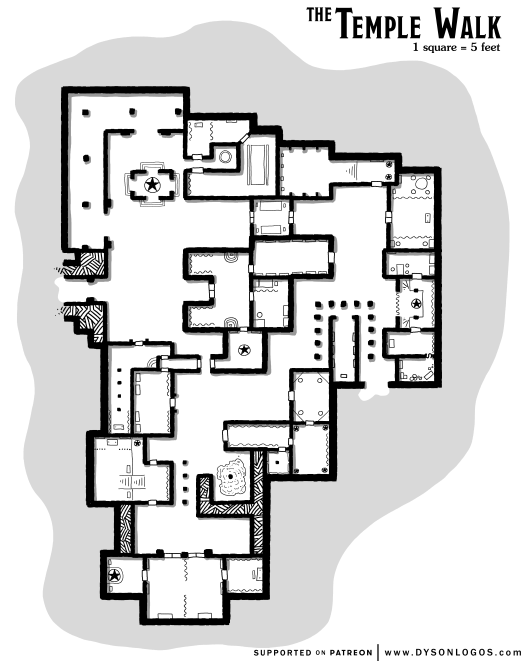 The Temple Walk – no grid

The two gates into the Temple Walk both lead into the same market area of the city, providing a respite from the haggling, shouting, and constant attempts to sell you things you only vaguely want or need (but you could change that, making it a startling transition point between market and government areas, for instance). Instead this district specializes in quiet monks and priests quietly and sternly attempting to sell you salvation and gifts of the gods that you only vaguely want or need.

1 thought on “Release the Kraken on the Temple Walk”