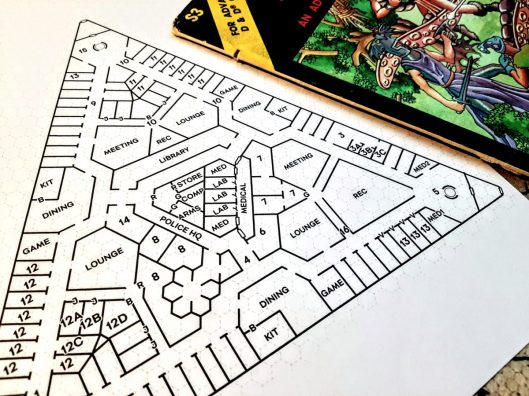 Four years ago I ran Expedition to the Barrier Peaks as the capstone to my first D&D5e campaign. The campaign ran through a number of classic adventures, but for the Barrier Peaks I decided I really wanted to trim down the size of the decks – reducing the time spent in blind exploration (particularly on deck 1) and condensing the adventure.

There are somewhat over 200 unlabeled rooms on deck 1, each containing furniture debris and 1d4-1 inanimate skeletons of the dead crew.

At the time, I redrew the decks on ledger-sized hex paper by hand. Unfortunately, the originals were destroyed by rambunctious cats soon after the campaign ended, and I never cleaned up the redraws or posted them anywhere.

But with the release of the new Goodman Games edition of Expedition to the Barrier Peaks, I decided to go hunting for what I had from my run through. I found some photographs of four of the six levels, dragged them into Photoshop, and used them as the foundation of a complete digital redraw. 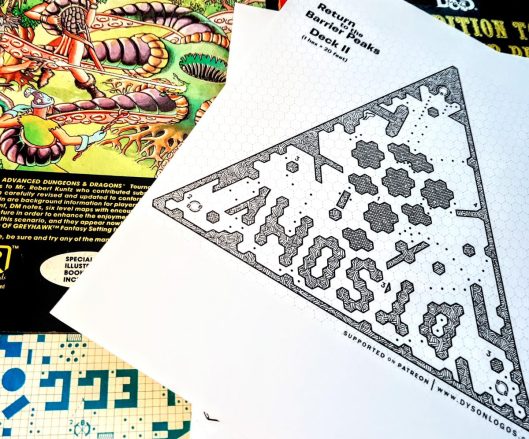 I’ve finished the first two levels so far, and have included them in the maps that will be released through the blog this month (and supporters of my Patreon Campaign have received the first to maps already). Meanwhile, I’ll start work on the lower maps this month and hopefully have another 2 done for February and the final 2 done for March.