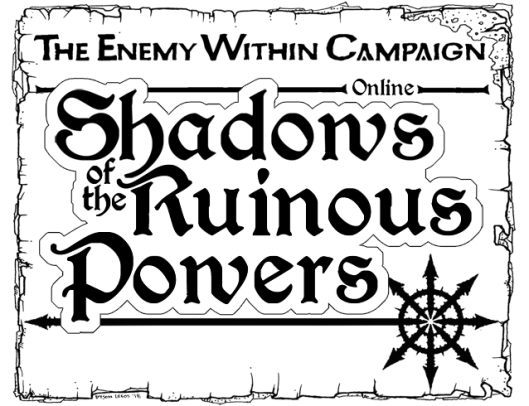 Gottlieb rejoins the group after a long night of research in the libraries of Verena. In a book of Teugen accounts and lineage, he discovered a pair of fairly recent notes written in to the back pages in a wild and shaky hand by persons unknown.

“Karl Teugen is suffering from a strange illness, the physicians have failed to help him and soon he will die. The Demons walk and he has been taken.”

“Karl Teugen died today, his face was purple and his eyes bulged from his head. His tongue hung from his face like a great bloated snake. The Mark of Chaos is upon him and upon all of Bogenhafen.”

Finishing their conversation with Doctor Reinhold Heichtdorn at the physicians’ guild, the group choose to check for potential solutions to the plague / curse / poison with the local herbalist and the fortune teller, as well as checking in with Herr Richter to be sure that things are as foul as they sound.

After barely avoiding a stampede of escaped cows from the Schaffenfest livestock exchange, Wilhelm manages to convince the fortune teller (Franziska Lang) to take him on as a ‘prentice, at least for a few days until she leaves Bogenhafen. Between her knowledge and that of the Herbalist who is spending time with Talbberry, they figure out that the disease in question is purple brain fever, which can be treated with some rare herbs that do not grow in this region and will have to be imported as quickly as possible to save the life of the poor magistrate.

At the Schaffenfest Court, Magistrate Richter’s secretary (Andrea) explained that he had fallen ill the night before and would not be in that day, and all cases were instead being handled by (the much overworked and quite grouchy) Magistrate Gorvintz. Further conversation led to her bringing up that the Captain of the Watch (Reiner Goertrin) had been in to see the Magistrate yesterday evening, and that Magistrate Richter looked pale and was shaking afterwards. Further, the captain seemed somewhat strange that evening – he seemed quite amused, which is very much unlike his usual demeanor.

Followup with Lieutenant Ernst of the watch at the Crossed Pikes over lunch confirmed that the captain of the watch had been stuck in his office the whole previous day, dealing with the various minor troubles piling up at the Schaffenfest (and thank goodness the whole fest thing is done today!).

Bringing everything together, the group managed to get an audience with the Captain to confirm his alibi, and got the good doctor to send couriers out to acquire the herbs that might save the Magistrate’s life… and concocted a plan.

Taking advantage of Othmar’s disguise and mimicry skills (“Damnit, I came here to impersonate someone important, and I’ll damn well impersonate someone important!”), he took on the role of the suddenly much healthier Magistrate Richter and made a number of public appearances – first at the Schaffenfest to close out the final night of the fair and release the men currently in the stocks, then a quick visit to the empty temple of Shallya. Next they were headed to the Pit which took them past Steinhager Warehouse No. 4 – which was surprisingly boarded up. According to a local, the warehouseman (Anton Breugel) drowned the night before after a hard night of drinking, and the Steinhager family had the warehouse emptied this morning until they could find a new warehouseman.

Under the pretense of the Magistrate “investigating”, the group broke in to the warehouse and uncovered evidence of a grisly murder – and not that of a goblin either. It certainly appears that someone killed Anton and then threw him in the river afterwards.

While in the warehouse, a group of stevedores assembled outside, and their leader stepped forward to explain that the group would be much safer conducting their business elsewhere… very elsewhere. Like Altdorf. Not giving them time to fully express exactly how threatening they intended to be, Wilhelm distracted them with blather while Larry shoved through their ranks, knocking one painfully to the side inside the office and sword-punching a second so hard that he staggered back into the river. The rest of the stevedores scattered post-haste.

The door to the warehouse office closed with a fade to black as they interrogate the leader of the stevedores who explains he was here doing a job for Gurney Dumkopf – a powerful man within the guild. They are sure Gurney was in turn hired by either the Steinhager or Teugen families, but aren’t willing to take on the whole stevedores’ guild to find out.

So the group moves across to the Pit, to seek out both the priestess of Shallya to show off the Magistrate’s return to good health, and to track down the doomspeaker they had seen that morning.

As sun sets and Morrslieb rises, full again and seeming even bigger than last night, the face more pronounced, they track down the hovel of “Ulthar the Unstable” as the locals call him, where he is found with his throat torn out. Marlene Rubenstern, priestess of Shallya, confirms his identity, and that he was close friends of Karl Teugen until his death two years ago.

1 thought on “Shadows of the Ruinous Powers – Session 10”