Below the looted ruins of the Temples of Shadows are a number of substructures and underground complexes that have at least partially escaped the ravaging of the temple complex – hidden under broken masonry, collapsed structures, and secret accessways. 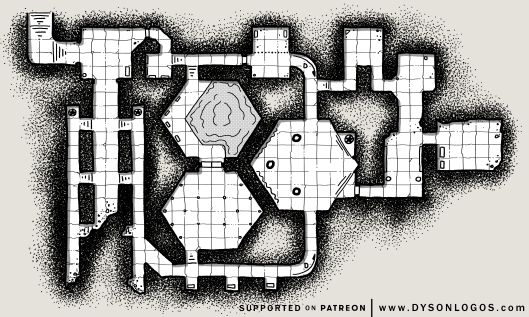 Pits of the Fallen Legion

The Pits of the Fallen Legion was once the end of the Amber Hall that stretches under most of the ruined complex. A few teams have attempted to excavate their way through the collapsed Amber Hall to reclaim and loot the pits, but the magics and other hazards of the Temples of Shadows have foiled all attempts. But a recently recovered text about the Fallen Legion includes a reference to the amber stair – the northernmost end of the Amber Hall – and most importantly that it leads up to the Pillar of Judgment and not the Fortune Tower where Meze the Vindictive’s expedition had been searching for it. 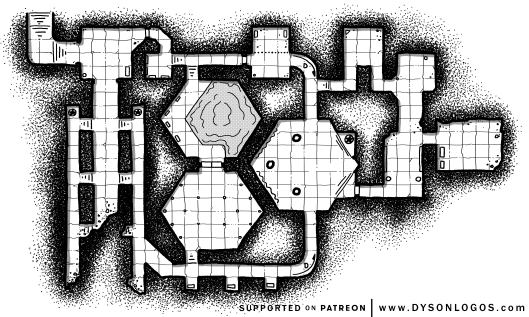 Pits of the Fallen Legion (B&W)

With this new information in hand, the order of the Sisters of Foundation are assembling a new expedition to reclaim the artifacts of the Fallen Legion. The question is if the party is willing to take the job… or try to beat the sisters to the site. 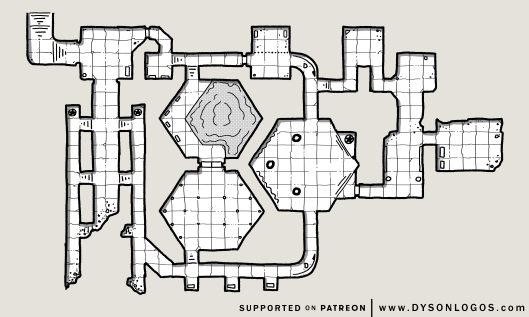 Pits of the Fallen Legion (Stipple-Free)

This map is the first of a series of maps that I’m drawing at 3×5 index card size instead of letter or even ledger sized pages. This particular map was drawn using an 8 square per inch grid, but generally I’ll be working at 4 to 6 squares per inch – making a series of easily portable maps for my DMing kit.

4 thoughts on “Pits of the Fallen Legion”