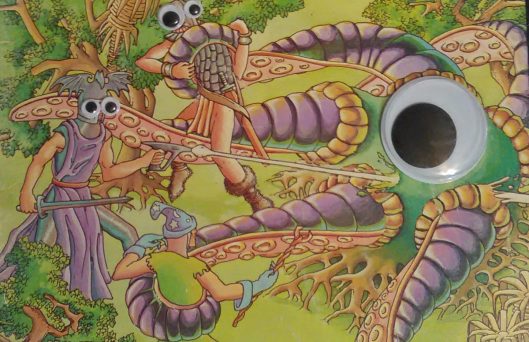 This month we are closing out the set of remakes of the Expedition to the Barrier Peaks maps with the release of Deck V today and Deck VI early next week.

Deck V, like Deck II, is a maintenance deck. While Deck II is memorable for Gary’s “signature” built into the deck plan and an intellect devourer wandering the premises, Deck V is less exciting structurally, but I found it more memorable in play because of the leakage of water and molds from the garden deck above.

The central part of the deck is the “lake” from Deck IV, secured behind a strong plasteel bulkhead (although in one campaign I played in, the bulkhead was disintegrated, lowering the lake’s water level significantly and flooding this deck).

Access to this level requires the use of brown or higher level key cards. The drop tubes end at this level and are secured by brown keyed doors like Deck II, and the “T” markings are locations where ladders lead up to brown-keyed secret doors in the floor of Deck IV.

As with the other redrawn decks, the numbered encounter areas are the same as they appear in the original module, just juggled around to fit the new structure of the level.

2 thoughts on “Return to the Barrier Peaks – Deck V”