This week I’ve been drawing a single large dungeon map because I haven’t done something as convoluted as my Mapper’s Challenge maps in some time. This time I decided to work on something direct to digital at ledger size (11″ x 17″) at 6 squares per inch. And to help me get it done “quickly”, I decided to stream the whole thing.

(Want to catch my live streams? I stream cartography irregularly on Twitch at https://www.twitch.tv/dysonlogos – the best way to get notified when I go live is to turn on notifications there, or to follow me on Twitter@DysonLogos where I announce the streams)

The photo above was the result of the first four-hour stream where I set out the underground river locations (which would change in time) and drew in the tombs that would become the entrances into the depths as well as the ghoul and wererat tunnels that connect the tombs to the depths. 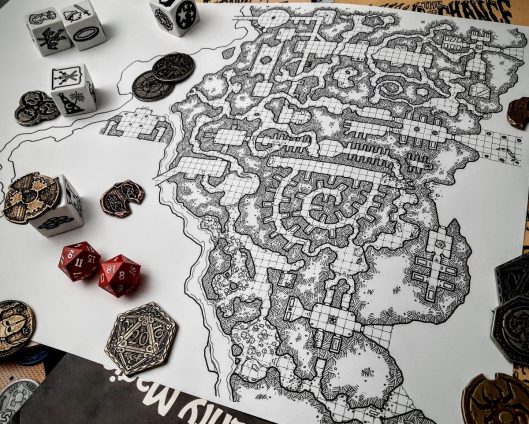 The second stream was three hours and finished everything on the east side of the rivers. We have the tombs, the “lost crypts” which are not directly connected to the outside anymore, all those lovely little tunnels, and a mushroom cave to feed those living deeper within the caves and constructions. 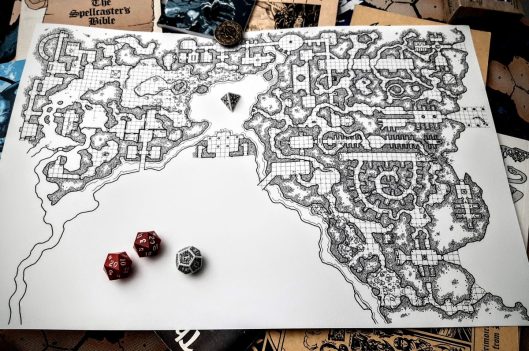 This map is after a third stream, where we finally crossed the river (and re-routed it so the areas to the left and to the south were roughly equal in size) and started exploring the massive cavern attached to the underground lake, and the structures around said. 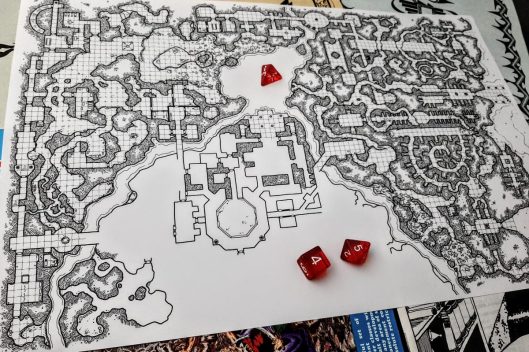 And here’s where we are after Wednesday’s stream – the left side of the map completely done, and the south side getting roughed out (and a bit of extra detail work on what’s outside of the tombs on the right). There was no Thursday stream because I was dealing with family emergencies, so…

Tonight (at around 8:15 Eastern – so in ten minutes or so) I’m going to try to finish this massive map off live on my Twitch channel – https://www.twitch.tv/dysonlogos

The finished map will be released in three sections through the blog in May.

3 thoughts on “Been working on something big…”