There are a number of stories as to why this tower is so deeply embedded in the earth – stories of earth elementals trapping it by raising the land around it; of epic castings of transmute rock to mud sinking it; and of course that some potent deity smashed it into the ground as punishment (perhaps the wizard who first built the tower shouldn’t have named their latest spell “Thor’s Wimpy Comeback”?) 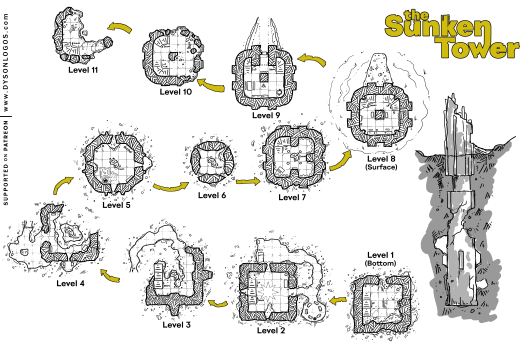 But here it is… all eleven remaining levels (some significantly less intact than others) of the sunken tower. Based on the debris and structure, it can be surmised that there were another two to six levels above the ruined crest of the current structure at some point.

This map is based on a request from Kurt LaRue, one of the supporters of my Patreon campaign. I try to post a call for requests a few times a year for patrons at the $2.50 level and up. This one really came together nicely.

6 thoughts on “The Sunken Tower”