The cliffs of Shu-Qune on the Black Sphinx Bay make landings there difficult, but are riddled with small caves and passages. Most of these caves are a few dozen feet deep before they dead-end or form tight chimneys launching spray up the stony embankments above, but some either naturally pierce the stones, or have been modified by hand or magic to do so.

These caves were natural low-ceilinged caves that were then expanded in certain places to make them more easily passable and were once used by the local fishermen who would keep their coracles in the caves and push them out to sea from there.

Near the main entrance into the caves is a shrine to the water gods and spirits of the region –  a collection of minor demons & elemental princes who’s fickle attentions the fishermen tried to distract via the shrine so they would not notice their boats at sea. 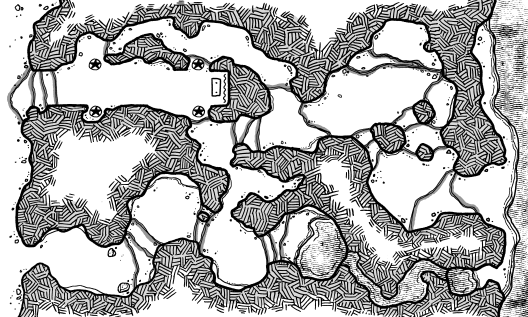 With the current hostilities between Shu-Qune and Kalesh-Sonket, the fishing here has ceased and the passage is instead watched for spies, emissaries, or travellers seeking a way from the hostile oceans to the bitter lands of Shu-Qune.