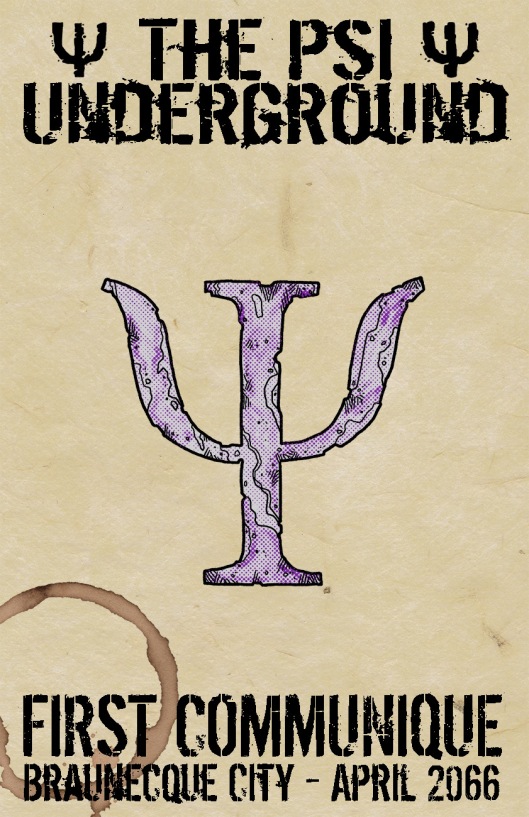 The Psi World RPG was released by Fantasy Games Unlimited as a lovely boxed set in 1984. You can still buy the boxed set from them directly, or in PDF through DriveThruRPG.

The Doomslakers group that I game with on Monday nights have recently picked up this piece of history and resurrected it under the GMing of James V West (creator of the Black Pudding zine and a plethora of awesome old school D&D character sheets).

Of the players in the group, I’m the only person who’s played this before (way back in 85-86) and it has been a riot to revisit the game over three decades later. When I first played it, we hadn’t a clue about the Cyberpunk genre that is hinted at here, and now that we’re playing it again Cyberpunk is way in the rearview mirror. The setting is very “Do Androids Dream of Electric Sheep” (minus the replicants… for now) meets Scanners & Firestarter.

So, as any group does, we immediately started spitballing ideas about the game, rules, and setting.

The first of these spitballing rounds turned into this. The First Communique of the Psi Underground. It is a classic 8-page digest-sized zine plus covers. A simple offering of material for this old-school RPG. It is available as a Pay What You Want release on DriveThruRPG – feel free to grab it for free and come back later to lavish us with money.

I’m not promising a second issue, but we’ve already got one almost half done.

COMMUNIQUE 1 FROM THE PSI UNDERGROUND
https://www.drivethrurpg.com/product/312710/The-Psi-Underground–Communique-1

1 thought on “Communiques From the Psi Underground”