The Ruins near Elverston Hold

Upriver from Elverston Hold are the local swamps & marshlands (like most of the features in the area, they are just known as the swamps and marshes – the folk of Elverston all know what they are talking about. At the edge of the swamp are old elven ruins that were destroyed from within in the years leading up to the great war.

The Ruins near Elverston Hold

These ruins, now slowly being consumed by the marshland, have been used by bandits, troglodytes, a mercenary band of elves, and at least one hermit since the fall of the elven empire. They are close enough to Elverston Hold for bandits to strike at passing traders, but far enough away that few would come here to disturb the residents. 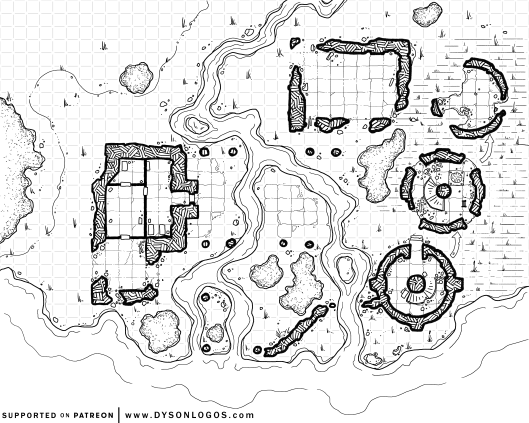 The Ruins near Elverston Hold (B&W)

The tower makes the site easy to find, but only the ground floor is remotely weatherproof and in heavy rain the water has been known to come pouring down the stairs. The western building, however, still has most of its roof and has had the doors replaced on at least one occasion making the space livable if not comfortable.

And since I added some colour to the first version of this map, I decided to try REALLY adding colour to it. I’ve practiced with colourizing my maps in the past but am rarely happy with the results. But this one I’m happy enough with that I’m not only releasing it with the rest, but also under the same commercial use license.

9 thoughts on “The Ruins near Elverston Hold”