As the scope and size of A Character For Every Game expands, it becomes harder to find some of the items that would be found on a more traditional RPG website. On this page I’ve organized links to all the material I have prepared for download. This includes games (complete or not), additional material for said games, and other items such as adventures and PDFs that I’ve compiled for downloading (as well as the surprise hit of the blog – my character sheets)

Geodesic Gnomes is a cyberpunk-styled RPG where players take the roles of people who live off the grid inside the walls of the domes that cover all the major cities on Earth and across the solar system. It contains an overall game setting, a sample regional setting, character creation, social, physical and political interaction rules, character creation and an adventure.
.
.
.

Adventures in the New Kingdoms

My first full RPG. Adventures in the New Kingdoms is the setting I’ve been running Fantasy RPGs in for most of my life. The ancient empire of the Kale has collapsed under its own weight and is being replaced by the age of man. Of the three greatest Kale cities, only one still remains within their grasp, the other two being the centres of great human city-states.
.
.
.

Challenge of the Frog Idol

AWARD WINNING LABYRINTH LORD ADVENTURE
Winner of the Fat Frog Challenge, this 20-page adventure includes a hexmap, a city, several site-based encounters, and the option to play it as a sandbox or to railroad the players as much (or as little) as you want.
.
.

Into the Worm’s Gullet

AWARD WINNING ADVENTURE
Winner of the 2011 One Page Dungeon Contest, this 1-page dungeon is a short no-stats adventure designed for a party of level 4-5 characters. Enemies include shadows (of dwarven acolytes), rock living statues (shaped like dwarves), an insane dwarf who is treated as a living statue in game terms, and a collection of apes and baboons.
.
.

Infinite Caves of the Shroom Goblins

This six page adventure has the players stuck in the infinite caves of the shroom goblins, needing the help of the goblin king in order to escape and return to their previous quest. Designed as a side adventure for a truly unlucky party.
.
.

More than just a one-page dungeon, The Charmed Grotto is a full module for levels 5 to 8 B/X Dungeons & Dragons or Labyrinth Lord adventures. It has it all, old-school style with random rumours, a collection of different types and power levels of creatures inhabiting the grotto, and the sexiest map I’ve drawn to date. A seven page PDF download for your adventuring pleasure.
.
.

My most popular one-page dungeon. This level 1 dungeon is entirely mapped from the side view. The lesson is that just because it is in a module doesn’t mean you can kill it.
.
. 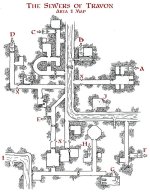 The Sewers of Travon (Area 1)

A section of the sewers under the slums that are riddled with passages and basement accesses. This is the home of the secret meeting place of the thieves’ guilds as well as the teamsters’ smuggling tunnels from the docks. Includes a 2-page download with a full-page version of the map.
.
.
.

The Tomb of Dûrahn Oakenshield

My submission for the One Page Dungeon contest, which won an honourable mention as “Best Introductory One-Shot”. This single-page system-neutral PDF details a small tomb now being occupied by bandits.
.

A one page dungeon for B/X (or Labyrinth Lord) characters of levels 2-4, set on the shore of the Ironflow river once it goes underground into the ruins of the dwarven citadel of Kuln. It is statted out in a very “system neutral” fashion.
.

Burial Mound of Esur the Red

A one page dungeon for B/X (or Labyrinth Lord) level 2 characters, this is a red herring waiting to happen. The “obvious” dungeon includes a treasure map for the location of the treasure that is meant to point to another local dungeon of your own creation (or any other one page dungeon), but lies. The actual item the players are looking for is in a second secret tomb behind the one where the red herring map is found.
.
.
.
.

The first link is to a landscape format hand-tooled B/X D&D character sheet.
The second link is to a 4-page folder that prints on a single letter page and is then folded.
The third is to a single-page sheet that folds down into an 8-page PocketMod booklet.
Both also have Labyrinth Lord versions available for download.

A collection of all the dungeon geomorphs I posted here for over a year and which also became the inspiration for similar (although far more awesome) geomorphic mapping projects by Risus Monkey, Stonewerks and Aeons & Augauries. 17 Pages of Geomorphs in a PDF set to print and cut out for your own use, and you can reuse and mangle them for your website or other non-commercial dungeon creations to your heart’s content.
.

A simple although different character sheet for Goblinoid Games’ Mutant Future RPG (which is pretty close to being a Gamma World 1e retro-clone).
.
.
. 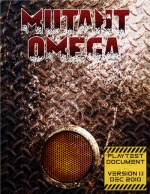 A revision of the Physical and Mental mutation tables from Mutant Future to incorporate about 20 new mutations as well as Mutation Score mechanics for all of those mutations. This particular download remains a work in progress, this is version 1.1 of the playtest document.